Very often Manuel and Francisco Aires Mateus enrich the presentation of their projects with photos of quarries or rock scenarios, and from that it can be easily understood the high value given by the architects not to the mass itself, in its entirety, but to the eroded and dug solid form and to the void the consequently is originated.[1]
As these strongly evocative photos underline once more, the cavity – or better, the mass at its negative – is a recurring study theme in the architectures by the Portuguese brothers and recently has been developed by Manuel on the scale of the project design in creating a collection of pieces for the bathroom furnishing made of natural stone. The collection, conceived for the Pibamarmi brand, is characterized by a simple, pragmatic, conceptually immediate design, including archetypical shapes of water holders as buckets, tubs, and bowls. They are elementary objects, rudimentary in some sense, but yet becoming refined as the subtle and curved lines of some porcelain vases or crockery. 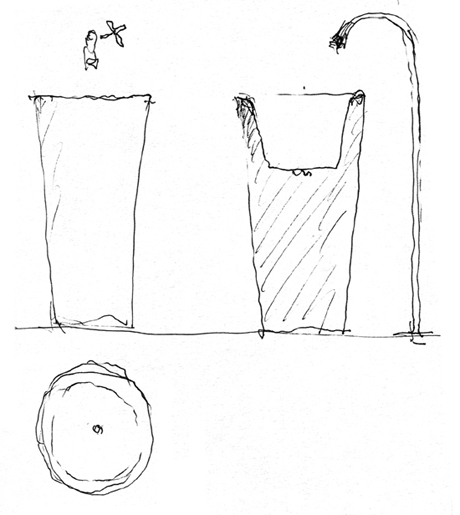 Aires Mateus’ project design is indeed concentrated on the contrast between essentiality of mass and complexity of void, on the identification of nonaligned negative volumes, designed according to a continuous and sinuous line, de-materializing monoliths in the shape of truncated cones or parallelepipeds; near the borders the so-obtained cavities follow a flexible and sharp movement, inspired by the shapes of the Oriental china, ancient yet extremely elegant and accurate in their material consistence and in the details of their borders.
In this first experience as a designer, Manuel Aires Mateus keeps re-elaborating the cavities in his formal world: they take shape as plastic masses or as hollow volumes obtained through a process of removal of the material, in this case even more explicit because expressed in a mono-material context uniquely dominated by the presence of stone.[2] 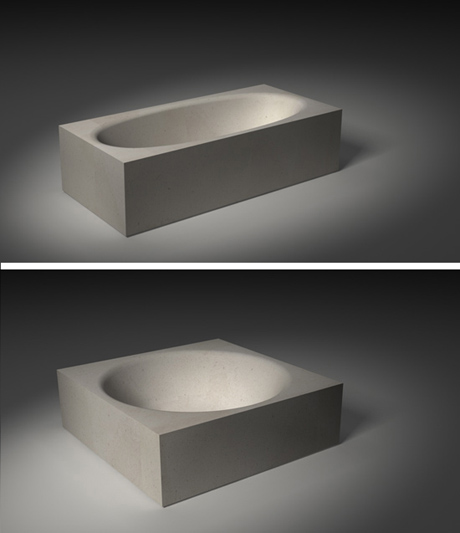 The cavities of the elements, thanks to their particular section, play with light in a series of penumbras and shades that become more and more intense, starting from the edge to the curved and tensed bottom; the Portuguese architect’s project faces the complexity of characteristics involved in designing the void, its diverse morphologies and dimensions, its lighting conditions and, above all, the dynamics through which the visitors experience it.
From the series of technical elements for the bathroom, according to Aires Mateus, product design perfectly integrates with interior design, reaching a concept of total design of the body care environment: the overall value of the projecting action is once again in the enclosure, in the spatial enucleation, in the indication of a precise domain defined by wall surfaces in which the objects are collocated in interaction with the void and the walls delimitating it. More than ever basins, tubs and shower plates aren’t protagonists unrelated to the context, but are co-protagonists leant against the walls, or partially included in them, or even built into the floors, partially revealed, partially hidden by the stone casing of the room. 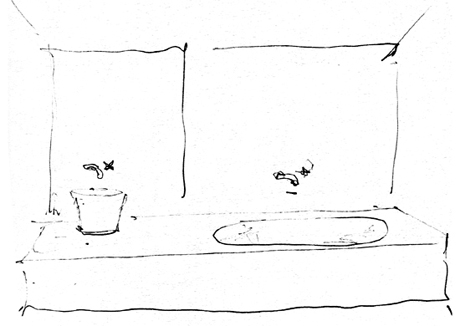 In this idea of coordinated bathroom, constituted by collection of pieces and stone surfaces, it is possible to recurrently find dimensional modules of 35, 45, 90 and 110 centimetres, that characterize basins and plates dung into the floor screed, while the covering plates develop in vertical direction. These modules are aimed to guarantee maximal flexibility in order to cover with continuity surfaces of different typologies.
As suitable for shapes excavated from stone, the borders and the walls of tubs and basins are full and precise but not too deep, the monolithic volumes are well proportioned, the finishings of the stone surfaces are smoothed and silk-like, soft at the touch. Every technical element, autonomously or in couple, can find the right collocation in an existing bathroom, every piece of the collection – rigorous and essential in itself – has a precise function in an archipelago of technical object that can be re-distributed in multiple configurations without need of expressly re-dimension the space. Careless of fashion trends, Manuel Aires Mateus’ objects aren’t thought to be showed in a catalogue-like environment, but to create new formal and functional archetypes, able to have a real role in the world, in a possible everyday life, engaging an authentic and direct interaction between the users and their most immediate needs.


1. About this see Juan Antonio Cortes, “Building the mould of space. Concept and experience of space in the architecture of Francisco and Manuel Aires Mateus”, El Croquis n. 154, 2011, p. 25 e p. 41.