Pibamarmi is delighted at the news of Yvonne Farrell and Shelley McNamara, founders of the Dublin studio Grafton Architects, being awarded the prestigious Pritzker Prize 2020. Congratulations to Yvonne and Shelley who collaborated with us with their pavilion, The Burren, in 2012. 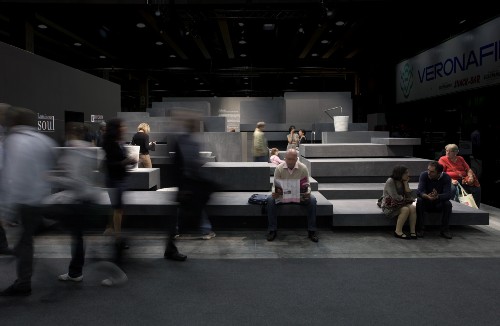 Grafton Architects studio was created in 1978 in Dublin and has projected several public buildings for institutions or universities, as the Department of Mechanical Engineering, Trinity College, and the Department of Finance offices in Dublin, as well as the extension of the Bocconi University in Milan; this last work was worth International recognitions as the 2008 World Building of the Year award and the ranking among the five finalists of the 2009 Mies Van Der Rohe Prize.

They kept receiving prizes and awards till today: in 2020 they were awarded both the Royal Gold Medal for architecture in the United Kingdom and the Pritzker Prize.

Among the other main buildings they projected in Ireland are the Loreto Community School in Milford (2006), the Solstice Art Centre in Navan (2007) and the Medicine School with its student houses at Limerick University (2012). But they are also present worldwide, with for instance the new UTEC Campus at Lima University (2015), the School of Economics at Toulouse University (2019) and the Marshall Building at the London School of Economics (under construction). Grafton Architects were the first Irish studio to be invited at Venice Biennale in 2002. Afterwards they were invited to the Laguna in 2008, in 2012 (when they were Silver Lion) and again in 2018 as curators.

The studio is directed by Yvonne Farrell and Shelley McNamara, who have hold lectures and conferences in Dublin, Harvard, London, Lausanne, Oslo, Yale, and Mendrisio.